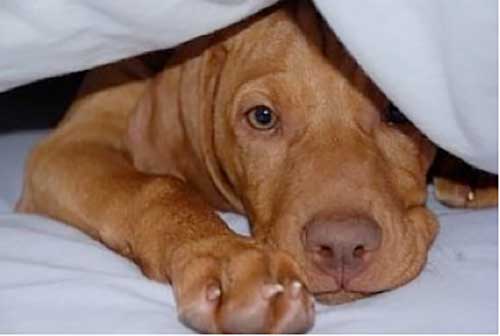 With all the rain and thunderstorms we have been having lately, I wanted to talk about the anxiety that many dogs go through during these thunderstorms.  It is one of the most common fears reported by dog owners.   About 20 per cent of dogs are known to suffer from anxiety and storm phobias.

A dog scared of thunderstorms may hide, pant, tremble, pace, drool, howl, bark, urinate, defecate or attempt to escape from the house or yard in order to ‘run away’ from the storm. Really frightened dogs may cause significant injuries to themselves and your home in their attempts to escape.

Thunderstorm fears can occur concurrently with other forms of anxiety and may be accompanied by fears of other loud noises, such as fireworks, or they can occur on their own. Many dogs are only frightened of the noise of the thunder although some dogs soon learn that rain, wind and clouds predict a storm is on its way and will start to show signs of stress or fear well before the thunder starts.

You need to provide a safe place for your dog.  Many dogs seek refuge when frightened and allowing access to an area that will give them security and comfort will help.  Close blinds and turn on the lights, this way lightening flashes won’t be seen. Moving to a room in the middle of the house and providing ‘white noise,’ such as a radio or television, may muffle the noise of the storm, although dogs have much better hearing than us!

Provide calm reassurance.  Avoid telling them “it’s okay” actually what you are doing by saying that is telling them “its okay” to feel the way they do.  By sitting quietly with your dog, try petting your dog and keeping them calm.  Many times rubbing the ends of their ears has a calming effect on them.  Keep your voice low and calm when you do speak to them.

Science has shown us that fear is very difficult to ‘reward’ using positive attention or treats and dogs that seek out their owners during storms are genuinely frightened. Talking to or stroking your dog at this time will not reward their fear, but may significantly improve their ability to cope with the storm. This is similar to reassuring a frightened child during a thunderstorm.

As we have talked about dogs learn by association.  If your dog is not to stressed try to give them a treat.  Give them their Kong or favorite toy if possible.  Associating things they like with something they are frightened by will help them deal with their fear.  Don’t worry if they won’t take a treat at first, but do keep trying.

Many people have had success with the Thundershirt® or Anxiety wrap® provides gentle pressure around the body which may be similar to swaddling a baby. You can also get the same results with a tight spandex like shirt.  This usually will help smaller dogs, but I have not heard too much about it helping larger dogs.

The aim is have a calm and relaxed dog and ideally he should be able to sleep through the thunderstorm. Dogs do not generally ‘grow out of’ or ‘get over’ their fear, rather, they usually get worse with time. This is because with each exposure to the thunderstorm they confirm and learn that thunderstorms are frightening.