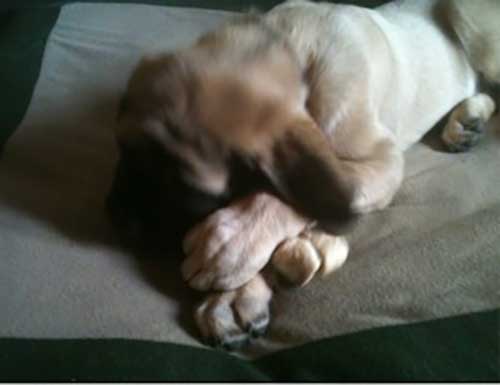 One item that fascinates me in dog training is the communication factor.  How is it dogs communicate with each other, but more interestingly is how the communicate with humans.  How do we know what they want without speaking?  A simple thing at breakfast this morning put me back into thinking about this topic.  Every morning my one puppy will lie on the dog bed that is in our dining area.  He stays there while my husband and I read that paper and my husband has breakfast.  The other dog lies on the opposite side by the door.  Same routine every morning since we got the puppy a month ago.  This morning the older dog laid on the bed.  The puppy was besides himself!  It was like the coffee pot didn’t work for his morning coffee!  He didn’t know what to do.  He was nervous about approaching the older dog, yet you totally could tell he wanted her off so he could go lie on the bed.  I sat and watched without saying anything as to wanting to learn his communication factor with her.  He walked to the one side, sat in front of her with a distance of about five feet.  Playing it safe for sure.  She didn’t even acknowledge him.  He then went to her opposite side, and sat in front of her.  Nothing, she acted as if he wasn’t even there.  So now he tried to put a little more into his being there by quickly running to the opposite side, and trying to convince her to play.  Didn’t work.  I could totally see he was at his wits ends, so he decided he would bark at her.  She picked her head up, gave him a little grrrr… and he went away, but only for about five seconds.  He went back to the other side, her grrr…a little louder now.  He got the hint, he went and laid down on the side by the door with the biggest sigh ever.  We had to laugh as he wanted that bed so bad.  I called the older dog off and put showed her she could have the couch.  No sooner than that happened the puppy took over the bed.

Just gestures no words were ever spoke and both dogs knew what the other wanted.  The puppy and the older dog wanted the comfort of the bed, and I guess senority won, in the short term, as I intervened.  Many times owners will not put forth the effort to watch and learn about dog communication.  Some owners may have not seen the efforts of the puppy and assumed the older dog was being aggressive to the puppy when that wasn’t the case.  That is why it is very important to watch every thing.  Had I not seen the whole case, I may have walked in when she was letting him know she wasn’t moving, and assumed a whole different scenario.

There are specific items that we also show our dogs that could lead them to assume we mean something different than our intentions.  Here are some items that are intimidating or threaten them.

Standing over the dog

Smiling ( A show of teeth is a threat in their world.)

Going straight towards a dog

Hand on neck or hugging

Just watch your dog when they interact with other dogs, and even humans you will definitely learn a lot!