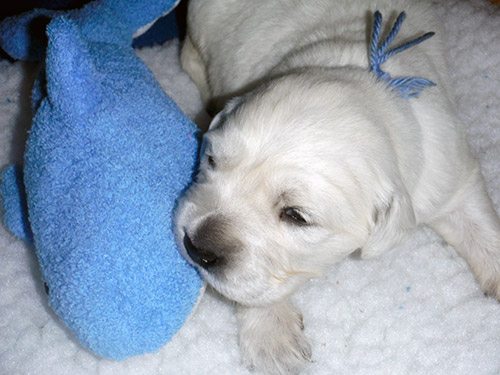 At Training Canines, we are proud to be able to offer to our clients the opportunity to take advantage of our early neurological stimulation program. This program is based on scientific facts on how puppies learn. It was developed over a course of many years and many blind test studies. Our military still uses this system called “Biosensor” also known as the “Super Dog” Program. It is based on three phases of training. The first being the early neurological stimulation, socialization being the second phase, and lastly the enrichment phase.

Many breeders today still hold on to the fact that performance of a puppy is totally inherited. Studies to determine the validity of this theory, were started as early as Charles Darwin and Francis Galton’s years. It has just been in recent decades that scientific data has proven 35% of a dog’s performance is inherited and 65% is based on other influences such as training, environment, management and nutrition.

Newborn puppies are very different from adult dogs in several aspects. When they are born their eyes are closed and their digestive system has a limited capacity. This is why the mother will routinely lick them in order to promote digestion. The pups are only able to smell, suck, and crawl. The body temperature is maintained by cuddling with their mother and their littermates. Research has proven that these puppies are extremely sensitive to thermal and tactile stimulation, motion and locomotion.

One test that was conducted on puppies was the Electrical Encephalogram (EEG). This measures the sensitivity to changes in excitement, emotional stress, muscle tension, and changes in there breathing levels.

The Biosensor Program involves five exercises that will produce neurological stimulations, none of which naturally occur during the early life of the puppy. The benefits that have been observed by providing this stimulation is: improved heart rate, stronger heart beats, stronger adrenal glands, more tolerance to stress and a greater resistance to disease. In learning tests the stimulated pups were found to be more active and were more exploratory than the pups not stimulated. Secondary effects that were also determined were that the pups handled stressful situations with less whining, were much more calm, and made fewer errors.

The second phase of socialization is critical to the puppy. Tests prove we have an extremely small window of 4-16 weeks. The lack of this controlled socialization adversely affects social and psychological development in the puppies. Puppies at this stage left to stagger in kennels will turn to the side effects of loneliness and boredom. The resulting behavior manifests itself in the form of chewing (a stress relief for dogs), digging, and hard-to-control behavior.

Many improperly socialized puppies develop into older dogs unprepared for adult life, unable to cope with the challenges, and interactions of people, other dogs, and environments. Attempts to re-socialize only produce small gains. Research showed these failures confirm the notion that the window of time open for the neurological stimulation and social stimulation only come once.

The third and final phase of the program is the enrichment. This has no time limit and covers a long period of the puppy well into adulthood. Enrichment meaning the positive sum of experiences, which have a cumulative effect upon the puppy. As the puppy is growing their nervous systems are developing and storing information. All like “money in the bank”. A study by Scott-Fuller University of Chicago Press, confirmed that non-enriched pups when given a choice preferred to stay in their kennels. Other littermates were given small amounts of enrichment between five and eight weeks. These pups proved to be very inquisitive and active. When kennel doors were left open, the enriched pups exited them looking to explore, while non-enriched pups refused to leave the kennel. The non-stimulated pups were fearful and preferred to withdraw. Even well bred pups with superior pedigrees would not explore or leave their kennels, and many were found highly difficult to train as adults.

This has been just a small overview of our program. Science has come so far in years past with studying the canine mind. Our society has become accustomed to making our dogs one of the family. With all that being said, we at Training Canines, are extremely proud to bring a new wave of training starting at just three days of age!